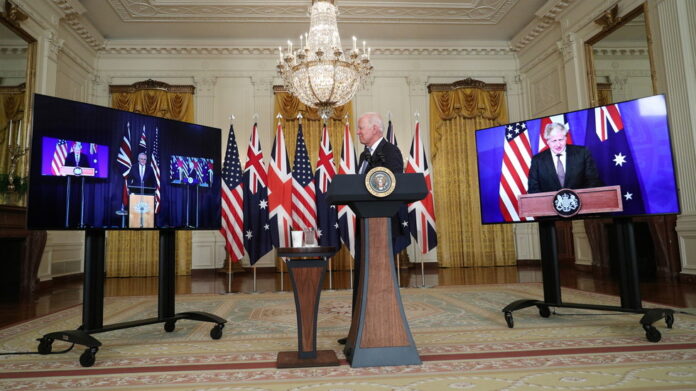 16 September 2021
(Wajdan Dar USA)
The US, UK and Australia have announced a new military initiative, dedicated to a “free and open Indo-Pacific.” The first step of the alliance that appears aimed against China is to provide Canberra with nuclear submarines.

British Prime Minister Boris Johnson and his Australian counterpart Scott Morrison joined US President Joe Biden in a virtual three-way announcement of what Biden called the “new phase of trilateral security cooperation” between the old allies on Wednesday.

The future of the three countries and even the world “depends on the free and open Indo-Pacific enduring and flourishing in the decades ahead,” Biden said, adding that AUKUS would be about making sure each nation has “most modern capabilities we need.”

The first concrete step in expanding and maintaining “aging military capabilities and critical technologies” would be providing Australia with nuclear-powered but “conventionally armed” submarines, Biden said.

“Only a handful of countries possess nuclear-powered submarines, and it is a momentous decision for any nation to acquire this formidable capability,” said Johnson “But Australia is one of our oldest friends, a kindred nation, and a fellow democracy, and a natural partner in this enterprise.”

Nuclear submarines are currently operated by only six countries – China, France, India, Russia, the US and the UK – who also possess atomic weapons. If and when the AUKUS project delivers results, it would make Australia the first country in the world with nuclear-powered subs but not weapons.

Biden said the project would begin with an 18-month “consultation period” between the militaries of the three countries, and involve the International Atomic Energy Agency to ensure “full compliance” with their obligations under the 1970 Treaty on the Non-Proliferation of Nuclear Weapons (NPT).

While the US president did not mention China, all the talk about the “Indo-Pacific” made it clear who the new and improved alliance was aimed against. The UK recently joined the US in sending warships on “freedom of navigation” operations in the South China Sea, a vital maritime trade route where Beijing has claimed a series of islands and reefs.

Asked to comment on the announcement, Chinese embassy spokesman Liu Pengyu said countries “should not build exclusionary blocs targeting or harming the interests of third parties. In particular, they should shake off their Cold-War mentality and ideological prejudice.”

Washington actually renamed its Pacific Command (PACOM) into “Indo-Pacific” in 2018, in a bid to court India’s cooperation in containing China. Biden also mentioned France – a NATO ally – as having a substantial presence in the region.

The introduction video preceding the announcement touted AUKUS as an alliance of “maritime democracies” united by their “democracy, resilience, innovations and diversity” in working “for the good of the world.”