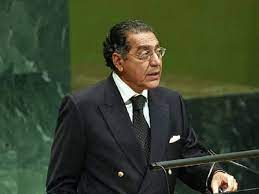 “NEITHER PAKISTAN NOR KASHMIRIS CAN BE DETERRED BY THE PROPAGATION OF FALSEHOOD”: AMBASSADOR MUNIR AKRAM PAKISTAN MISSION TO THE UN OBSERVED KASHMIR BLACK DAY IN SOLIDARITY WITH KASHMIRIS

A virtual event was organized by Pakistan Mission to the United Nations to observe 27th October as Kashmir Black Day. The webinar was titled: “The Great Betrayal: Forcible denial of the right of self-determination to Jammu and Kashmir, says a press release received here today from New York.

Ambassador Munir Akram, the Permanent Representative of Pakistan to the United Nations delivered his opening remarks. Ambassador Munir Akram in his opening address remarked that “27 October 1947 is one of the darkest days in Jammu and Kashmir’s history. It marks the start of the great betrayal, when Indian armed forces, in connivance with the Hindu Maharaja, landed in Srinagar to occupy, subjugate, oppress, and terrorize innocent Kashmiris. This pattern of brutalities continues with impunity even today”.

While underscoring the importance of UN Security Council resolutions, he said that: “Despite commitments made by the early Indian leadership and numerous resolutions of the UN Security Council on Jammu and Kashmir, the Indian government has unleashed a reign of terror in IIOJK. By obfuscation and denial, India continues to deprive the people of Jammu and Kashmir of their right to self-determination. Its claim that the so-called “accession” of Jammu and Kashmir to India is ‘perpetual and irrevocable’ is legally and historically untenable.

“Having accepted the principle of self-determination, India has since obstructed all attempts at holding an UN-supervised plebiscite in violation of UNSC resolutions 47 (April 1948), 80 (March 1950), 91 (March 1951), 98 (December 1952), 122 (January 1957), 123 (February 1957), 126 (December 1957)” he said further. Mentioning Indian state terrorism, he mentioned that “After the cold-blooded murder of Burhan Wani in 2016, the Indian “state terrorism” against Kashmiris in IIOJK reached unprecedented levels. Taking serious note of these excesses, the United Nations human rights mechanisms, notable human rights organizations, independent observers, parliamentary bodies, think tanks, and the international media took to report most extensively about the appalling state of human rights in IOJ&K”.

He also mentioned India’s systematic and widespread violations of human rights in IIOJK saying that “the United Nations High Commissioner for Human Rights published two comprehensive reports (2018 and 2019) on the despicable state of human rights in IIOJK, repeatedly calling for the establishment of a “Commission of Inquiry” (COI) to investigate gross and systematic violations of the rights of people of Jammu and Kashmir”. While “the Special Mandate Holders and Rapporteurs of the Human Rights Council have also frequently urged India to ease restrictions in Kashmir and hold the perpetrators of these heinous crimes accountable”.

Ambassador Munir Akram further condemned India’s violation of the Security Council resolutions and international law, saying that “India has introduced new and arbitrary “domicile rules” and 4.2 million fake domicile certificates to change the demographic structure of IIOJK and transform Kashmir’s Muslim majority into a dispossessed and dispersed minority in their own homeland”. “Simultaneously, a false propaganda war against Kashmiris and Pakistan continues unabated by India,” he said.

“The recent arrest of over 1400 Kashmiris on false charges in one of the biggest ever crackdowns in IIOJK and the dubious circumstances surrounding the arrest of an allegedly Pakistani individual in New Delhi are part of India’s well-known efforts to divert the world attention from its egregious human rights violations and illegal actions in IIOJK, and well-documented oppression of Muslims and other minorities. The Indian propaganda based on disinformation, lies, and deceit only reconfirms Pakistan’s apprehensions that, as it has done in the past, India is plotting “false flag operations” to blame Pakistan and Kashmiris.

“Neither Pakistan nor Kashmiris can be deterred by the propagation of falsehood” he insisted. He reiterated that: “Pakistan will continue to stand with Kashmiris in their just struggle for the right to self-determination, as promised to them by the United Nations through various Security Council Resolutions”.

A special video documentary developed by the Directorate of Electronic Media and Publications, Information Ministry featuring Ambassador Munir Akram to express their solidarity with the Kashmiri people in their struggle was also played.

The event was concluded with the prayer for the success in the struggle of Kashmir’s cause. The virtual event to commemorate this year’s black day focused on the legal right of the people of Jammu and Kashmir to self-determination guaranteed under international law, the UN Charter, and Security Council resolutions.

The objective would be to distill fact from fabrication by placing the legal aspects of the Jammu and Kashmir dispute in perspective. In his concluding remarks, Ambassador Munir Akram thanked all the worthy participants and expressed that the recommendations were put forward in this discussion, merit close consideration by all of us.

“I hope that we will be able to mobilize such concrete and specific actions. “The contributions that have been submitted is an inspiration for Pakistan mission at the United Nations. And We will redouble our efforts” towards the cause of Kashmiris right to self-determination. Earlier, today, Ambassador Munir Akram, also spoke to the Center for Security, Strategy & Policy Research, The University of Lahore, in a special segment to mark Kashmir black Day.

The event titled: In conversation with Ambassador Munir Akram was hosted by Dr. Rabia Akhtar, Director CSSPR. This special episode focused on what Pakistan’s public diplomacy strategy should be on Kashmir while discrediting the Indian narrative of disinformation.