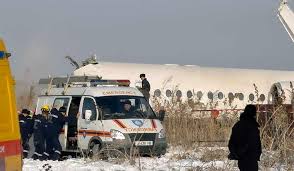 Almaty, Kazakhstan Four people died and two more were badly injured on Saturday when a military plane crashed and caught fire while trying to land in Kazakhstan’s largest city Almaty, the latest accident to hit the country’s aviation industry.
City authorities said the survivors were in intensive care and their condition was “extremely” serious.
The An-26 craft was travelling to Almaty from the capital Nur-Sultan, the emergencies ministry said, noting that the airport had lost contact with the aircraft at 1722 local time (1122 GMT).
“According to preliminary data, four people died, and two injured were sent to the nearest hospital the plane, which belonged to Kazakhstan’s national security committee, caught fire after it crashed at Almaty Airport.
There were rows of fire engines, police vehicles and ambulances at the crash site.
Videos shot from a road near the airport by eyewitnesses earlier in the day and published by local media showed thick smoke billowing in the distance after the crash.
Almaty Airport said in a statement that “the plane crashed at the end of the runway” without offering an explanation for the accident.