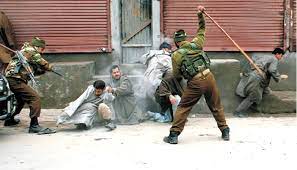 Kashmir Black Day was observed in Buenos Aires to condemn the illegal Indian occupation of Jammu and Kashmir. To express solidarity with the Kashmiri people, a seminar was organised at the Chancery which was attended by people from different walks of life including a large number of Pakistani families, says a press release received here today from Buenos Aires.

Speaking on the occasion, Ambassador of Pakistan to Argentina, H.E. Dr. Muhammad Khalid Ejaz gave a detailed background of the issue. He stated that it was on 27th October, 1947 that Indian forces illegally occupied Jammu and Kashmir against the wishes of the Kashmiri people and the set principle of independence.

The Ambassador recalled the litany of broken promises made by Indian leaders first and foremost by Mr. Jawaharlal Lal Nehru who had promised to the Kashmiris of a plebiscite to decide their future.

Dr. Ejaz appreciated Argentina’s participation in the United Nations Military Observer Group in India and Pakistan. He asked the Pakistani community to reach out to the human rights groups in Argentina with a view to apprise them about the humanitarian crisis in the Indian Illegally Occupied Jammu and Kashmir (IIOJK).

The other speakers at the event also condemned Indian atrocities in IIOJK in the strongest terms. The messages of the President and Prime Minister of Pakistan were also read out on the occasion. The seminar was preceded by a photo exhibition depicting Indian brutalities against the innocent Kashmiris and their resolve to continue with the struggle for right to self determination.

H.E. Ambassador Dr. Muhammad Khalid Ejaz also gave an interview to a group of Argentinian TV journalists highlighting the struggle of Kashmiri people for the right to self determination and the Indian brutalities against the civilians in IIOJK. He called on the international community to take note of the human rights violations in IIOJK.