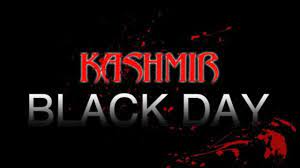 A special event was organized today in the Embassy of Pakistan, Washington, D.C. to commemorate the Kashmir Black Day, says a press release received here today from Washington D.C. Messages of the President and the Prime Minister of Pakistan on the occasion were read out.

A special documentary featuring the historical perspective and significance of the Jammu and Kashmir dispute and depicting the plight of innocent Kashmiris in IIOJK at the hands of Indian occupation forces was also screened.

In his remarks, Ambassador Dr. Asad Majeed Khan expressed solidarity with the victims of Indian repression in IIOJK and paid tribute to the resolve, bravery and steadfastness of Kashmiris living in IIOJK in pursuing their struggle to self-determination.

He reiterated government of Pakistan’s continued moral, political and diplomatic support to the people of Jammu and Kashmir in their just cause.

He said that the Prime Minister of Pakistan was leading the efforts as “Ambassador of oppressed Kashmiris” to raise his voice on their behalf. Ambassador Khan specially lauded the role played by the Pakistani and Kashmiri American community in highlighting the gross human rights violations in IIOJK and echoing the voice of innocent Kashmiris in the halls of U.S. Congress.

He stressed upon them to continue sensitizing the respective members of Congress and civil society on this grave issue. The Ambassador stressed that since respect for Human Rights is an important US Foreign policy pillar, the people of Jammu and Kashmir look toward US to play an active role in resolving the Kashmir dispute and end the repression of the people living in disputed territory.