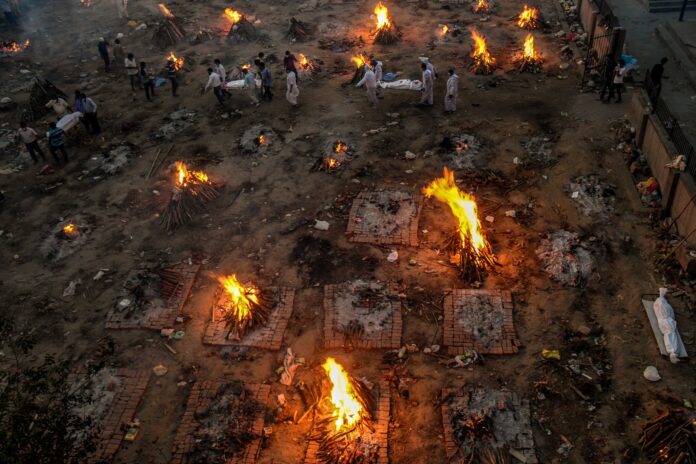 On Saturday, officials reported nearly 350,000 new infections, and the deaths continued to rise. At one hospital in New Delhi, the capital, doctors said 20 patients in a critical care unit had died after oxygen pressure dropped. The doctors blamed the deaths on the city’s acute oxygen shortage.

The Union government on Saturday decided to grant full exemption from Basic Customs Duty and health cess on import of oxygen and oxygen related equipment for three months.

Now, countless Indians are turning to social media to send out heart breaking S.O.S. messages for a hospital bed, medicine, some oxygen to breathe

At the same time, India’s Covid-19 vaccine campaign is struggling: Less than 10 percent of Indians have gotten even one dose, despite India being the world’s leading vaccine manufacturer. India’s dire needs are already having ripple effects across the world, especially for poorer countries. It had planned to ship out millions of doses; now, given the country’s stark vaccination shortfall, exports have essentially been shut down. 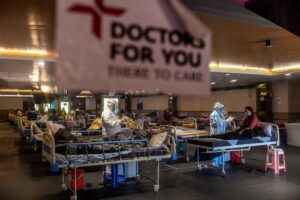 India’s population is, on average, much younger than in most Western nations. Experts say that is the most likely reason that deaths per million in India had seemed relatively low. But the number is quickly climbing.

According to excess mortality studies, Covid-19 deaths have been underestimated in many countries, including in the United States and Britain.

But India is a much bigger and poorer country. And its people are spread across 28 states and several federal territories in a highly decentralized system of governance, with different states counting deaths in different ways. 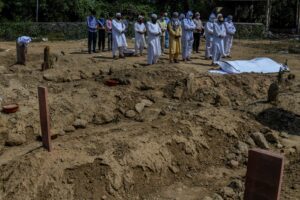 Even in a good year, experts say, only about one-fifth of deaths are medically investigated, meaning that the vast number of Indians die without a cause of death being certified.

Some families don’t want the truth to come out, said Dr. Mukherjee of the University of Michigan. Some want to cremate loved ones outside strict Covid-19 government protocols, and so they hide the fact that their family member died from the coronavirus. Others may feel ashamed about losing a loved one, as if it were their fault.

Rupal Thakkar tested positive for Covid-19 in mid-April. On April 16, she was admitted to Shalby Limited, a private hospital in her home city of Ahmedabad, but her oxygen levels suddenly dropped. The next day Ms. Thakkar, 48, died.

The hospital listed her cause of death as “sudden cardiac death,” which left the Thakkar family outraged.

“It was a lifetime shock,” said her younger brother, Dipan Thakkar. “Why would a private hospital connive with the government in hiding the real death numbers? It was an organized crime. It was an illegal act.”

Officials at Shalby didn’t respond to requests for comment.

After her situation was widely publicized in Indian newspapers, the hospital issued a second death certificate, this time including Covid-19 as a contributing cause.

“Two days ago someone came to me and said he needs to start preparing for his mother because doctors had given up on her,

“It’s unreal. I never thought I’d see the day where I’d have a request for starting the funeral formalities of a living person.” 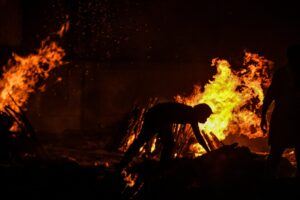 Officially, almost 180,000 Indians have died from coronavirus, 15,000 of them this month, although some believe the real number may be higher.

Social media and newspaper reports have been flooded with horrifying images of row upon row of burning pyres and crematoriums unable to cope.

In Ghaziabad outside Delhi, television pictures showed bodies wrapped in shrouds lined up on biers on the pavement with weeping relatives waiting for their slot.

In the western state of Gujarat, many crematoriums in Surat, Rajkot, Jamnagar and Ahmedabad are operating around the clock with three to four times more bodies than normal.

The chimney of one electric furnace in Ahmedabad cracked and collapsed after being in constant use for up to 20 hours every day for the past two weeks.

The iron frames inside another in the industrial diamond hub of Surat melted because there was no time to let the furnaces cool.

“Until last month we were cremating 20-odd bodies per day… But since the beginning of April we have been handling over 80 bodies every day,” said a local official at the Ramnath Ghela Crematorium in the city.

With waiting times of up to eight hours, Rajkot has set up a dedicated 24/7 control room to manage the flow in the city’s four crematoriums. 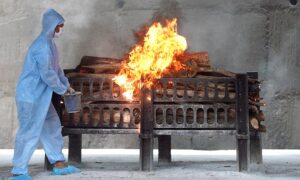 Bring your own wood

At two crematoriums in Lucknow in the north, relatives are being given numbered tokens and made to wait for up to 12 hours. One has started burning bodies in an adjacent park, an official told.

Some crematoriums in Lucknow ran out of wood and asked people to bring it themselves. Viral photos on social media showed electric rickshaws laden down with logs.

The ultimate place for Hindus to be cremated is Varanasi, the ancient city where since time immemorial bodies have been burned on the banks of the river Ganges.

Belbhadra, who works at one of the famous ghats there, told  that they were cremating at least 200 suspected coronavirus victims per day.

The usual time to get to the ghat — a riverside embankment for cremations — from the main road via narrow lanes was usually three or four minutes, a resident said.

“Now it takes around 20 minutes. that’s how crowded the lanes are with people waiting to cremate the dead,” he said.