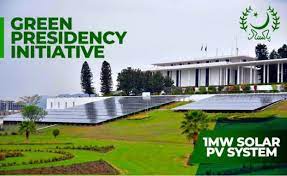 President Dr Arif Alvi on Wednesday inaugurated the one megawatt Solar PV (photovoltaic) panels at the Aiwan-e-Sadr, making it among one of the few presidencies in the world fully powered by green energy.

The solarization project, under the President’s Green Initiative, was kicked off in partnership with Engro Corporation where a net metering system will contribute 100 percent surplus energy to the national grid.

The initiative will lead to an annual decrease of 1450 tons of CO2 emissions and an annual contribution of Rs 32 million to the national exchequer.

Addressing the ceremony, President Alvi said Pakistan remained committed to realizing the untapped renewable energy potential – in hydro, solar, and wind – and to shift its energy mix to 60 percent clean energy by 2030.

He stressed the need to utilize alternative sources for power generation to fully achieve the goals of clean and green energy.

He said switching to renewable energy was vital to reduce the impact of climate change.

President Alvi mentioned that the Billion Tree Tsunami project by the government of Prime Minister Imran Khan was another step in the right direction to preserve the natural resources of the country, facing vulnerability to climate change.

He said a balanced strategy of eco-system was important to control the depletion of natural resources.

In line with further green measures for the Aiwan-e-Sadr, the President said plantation of 10,000 saplings was under consideration besides raising a vertical forest by one of its walls.

Also, the restoration of roof-window panels of the presidency that were earlier meant to get sunlight is on cards to save natural resources, he added.

He said plantation at the select parks of Islamabad on Miyawaki style would prove conducive for the environment.

The President said private industrial setups had a responsibility upon them to contribute towards the betterment of society.

He lauded the efforts of Engro Corporation in supporting the President’s Green Initiative and said the inclusion of the private sector in development endeavours could prove helpful in areas particularly energy security.

President Engro Corporation Ghias Khan said the green strategy was an important pillar of development, adding that the contribution of Engro would positively contribute to the mitigation of environmental hazards.