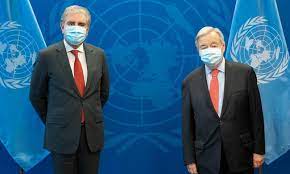 The Ministry of Foreign Affairs, in collaboration with the Office of the UN Resident Coordinator, organized an event today to celebrate the 76th anniversary of the founding of the United Nations. Foreign Secretary Sohail Mahmood was the Chief Guest.

A video message of the UN Secretary General was featured at the event. Speaking on the occasion, the Foreign Secretary reaffirmed Pakistan’s abiding commitment to multilateralism, with the UN playing a central role for promoting peace, security, development and human rights for all. He stated that multilateralism was, and will remain a central feature of Pakistan’s foreign policy.

The Foreign Secretary noted Pakistan’s constructive contributions to the work of the UN in promoting the fundamental principles of the UN Charter, including in the areas of peacekeeping, refugee protection, humanitarian action, climate change, and international cooperation for sustainable development.

Noting the various accomplishments of the UN over the last 76 years, the Foreign Secretary underscored that the UN’s mission of decolonization was not yet complete as the people of Jammu and Kashmir still awaited the exercise of their inalienable right to self-determination as promised to them by the resolutions of the UN Security Council.

He commended the UN for taking the lead in rallying international support for addressing the humanitarian crisis in Afghanistan and preventing its economic collapse, adding that Pakistan was playing its due role in support of that goal. The Foreign Secretary thanked all UN Agencies, Funds and Programmes working in the country for their partnership with Pakistan for advancing its socio-economic development objectives.

The UN Resident Coordinator, Mr. Julien Harneis, highlighted the multifaceted UN activities in Pakistan and appreciated the assistance by Government of Pakistan in evacuation of UN staff members from Afghanistan and facilitating the provision of much needed humanitarian relief to the country.

A youth representative also shared her views on the expectations from the United Nations for meeting contemporary challenges. The event was attended by the Heads of Diplomatic Missions and UN agencies based in Islamabad, as well as senior government officials and members of the UN staff.

The event also showcased the cooperation between UN Agencies and Government of Pakistan in the areas of health, food security, environmental protection, capacity-building and socio-economic development.